Video · A tutorial that demonstrates how to create an automated workflow to zip files daily, weekly, monthly, and so on. Files zipping is performed using the built-in Zip Files Action.

Different filenames of the archive are created using the Variable Wizard. It allows dynamically generated file names based on time, date, tokens, anything—there are no any limits.

The demo workflow can be improved by adding encryption to the zip files. Or, by deleting the unnecessary files after they have been archived using the Delete File Action. Also, it is possible to trigger the Task when a new PDF file is created in the folder, or when a file appears on an FTP server.

I'm very happy with Automation Workshop. It increased my productivity by tenfold!—Charles J.
Add your quote… 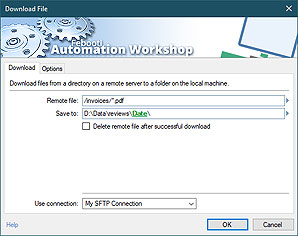