Video · A tutorial that demonstrates how to ping a server every 30 seconds and send an email in case of the server is not reachable. I also cover a Play Sound Action that allows you to make an alarm sound when the server goes offline. Even more! When your server is offline, the automated job sends a traceroute output to the specified email address.

The automated job can be extended with more that a hundred built-in Actions, ranging from file operations on the remote FTP server to document printing to your local printer.

Automation Workshop is an awesome piece of software—love the intuitiveness, flexibility and simplicity.—Howard C.
Add your quote… 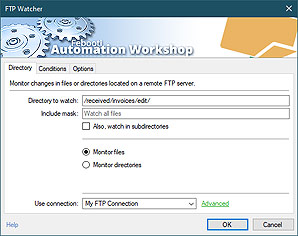