Deploying and running tasks on remote servers has always been a challenge. Windows built-in tools such as Task Scheduler and Windows Domain Administration Tools require specific knowledge and are not very user friendly. Introducing Remote Manager Deployment tools that allows you to roll out automated and scheduled tasks on hundreds or thousands of servers from a simple user interface · Connections

Automation Workshop allows managing remote instances in the same manner that you are managing your local tasks. To access a remote machine, the Allow remote access option must be set to Full access.

The Run Task command allows you to execute a Task on the selected remote servers or workstations. The Task should be created on the local machine, tested, and then deployed to remote machines using the Push Task command.

In order to create automated jobs that are started on schedule, or when a new file appears on local, FTP, or cloud server, use one of the Triggers, and then use the Enable Task command to activate the Task Triggers.

Before issuing the Run Task command a feedback from each server is shown:

To deploy a Task on a remote computer, use the Push Task command. The Task is then uploaded (copied) to the selected servers or workstations. The Task keeps its state when it is pushed. If a pushed Task is enabled locally, it will appear on the remote computer also in the enabled state · Task's state explained

Some of the possible Task states on the remote servers before the Task deployment:

Automation Workshop is a powerful Windows Job Scheduler with a lot of automated Triggers for unattended and intelligent jobs. Once an automated job or task is created, it can be reused on numerous servers with a single click.

Orchestrate deployment operations manually or schedule it for automatic start on schedule or event. There are 100+ Actions and Triggers to automate email sending, file operations, remote server monitoring, FTP and cloud file watchers, and a lot more · Automate and orchestrate Windows machines!

Use the Enable Task command to activate a Task on multiple computers. When a Task is enabled, its Triggers become active and are ready to start the Task automatically—on schedule or event. Read more about Task states.

The Disable Task command disables a Task and deactivates its Triggers. When a Task is deactivated, its Triggers are not active and will not start the Task automatically.

When a Task is no longer needed, you can use the Delete Task command to remove it from one, multiple, or all servers. To preserve the Task on the remote computer but stop its running instances, use the Remote Queue Manager.

As an alternative to the Remote Deployment, the automation API can be used to start, import, export, or delete Tasks triggered from any custom app or database. Automated and unattended Tasks can be started in a lot of different ways.

Distributing the same workflow on multiple machines has never been easier. No more unmaintainable PowerShell scripts. Orchestrate your automated Tasks on all your computers in a no-code manner with Automation Workshop!

After initial setup Automation Workshop runs by itself and never fails.—Madison B.
Add your quote… 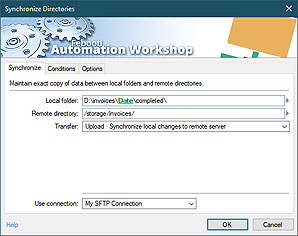