Automation Workshop features direct user interaction Actions that can be deployed anywhere within the Task. When executing an Action from Dialog Boxes category, Automation Workshop displays a dialog window and requires user to answer a yes-no question, input a value or specify a folder.

Dialog Boxes can have custom title, fixed or automatically generated text as their contents. Dialog boxes are visually emphasized by graphical icons and can be instantly brought to the foreground to grab user attention. Use the Text to Speech Action—Talk in the background feature to makes dialog boxes even more interactive!

Show Message Action displays a message window with custom title and either fixed or automatically generated text as its contents.

Input Dialog Action displays a message window with custom title and text. The user is then required to input some text or data that can be used in other Actions of the same Task.

The Dialog Boxes category is not limited by dialog windows listed above. Dialog boxes Actions can also stop the Task execution, generate data for other Actions within the same Task and provide other useful options when designing Tasks with user interaction feature.

Automation Workshop has saved me over an hour each day. That's literally extending my life!—Richard J.
Add your quote… 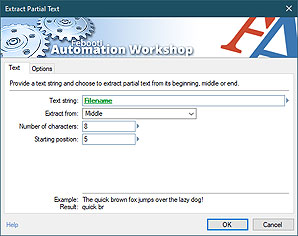